Skip to main content
Events at Thompson Conference Center Canceled Until Further Notice
Staff are operating remotely. Please excuse some delays in responding to your calls and emails.
Learn More

The genesis of the Thompson Conference Center dates back to 1956, when Joe C. Thompson first discussed the idea of a conference center. Thompson was a graduate of The University of Texas at Austin whose company eventually became the current chain 7-Eleven. Though Thompson died in 1961, the Board of Regents at UT Austin approved the creation of TCC on June 18, 1966. Completed in 1970, the Joe C. Thompson Conference Center (TCC) was specifically designated for use in continuing education and public service programs directed at off-campus adult groups.

Built in the style of the time, TCC retains its mid-century modern charm. The angular building echoes the simplicity of design prized by that architectural movement. Swaths of windows invite the outdoors inside in common areas like the lobby and the dining hall, where the surrounding 100-year-old oak trees feel like they're part of the room.

In 1977, Tom Hatfield was appointed Dean of Education. During his 28-year tenure and since, that department has grown to include more than 900 programs for people whose needs surpass the scope of customary campus offerings.

Today, the Thompson Conference Center focuses on supporting a wide variety of clients, opening UT Austin's campus to the public. With an affordable price point and a central location in the Austin metroplex, TCC serves businesses and organizations which host meetings and prioritize value and convenience. The staff at the Thompson Conference Center is proud to be able to assist these organizations in furthering their educational missions.

The versatile space at TCC is frequently used by local associations for monthly chapter meetings, government agencies for training staff and campus groups for lectures and ceremonies for both on-campus and off-campus audiences. Larger organizations may use all of TCC for a conference, with a keynote address at the nearby Lady Bird Johnson Auditorium and a buffet reception in Under the Oaks.

As part of TEXAS Extended Campus, TCC also hosts a majority of the courses offered by UT's Informal Classes and the Center for Professional Education. UT's branch of the Osher Lifelong Learning Institute, a robust educational program aimed at retirees, is also housed at TCC.

TCC's Under the Oaks Cafe offers fresh fare for breakfast and lunch, Monday through Friday. Attendees at TCC's daytime events are able to visit the cafe if their event is not providing catering from Under the Oaks (or even if they just feel the need for a mid-morning snack!).

The Thompson Conference Center (TCC) is more than just a building full of meeting rooms. The TCC coordinators manage the rooms at the Thompson, as well as the dining hall and the LBJ Auditorium. 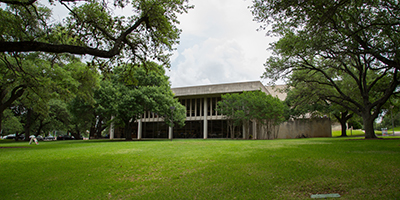 Many different kinds of events have been held at the Thompson Conference Center, Under the Oaks and the Lady Bird Johnson Auditorium over the years. Here are some that have stood out to those who helped run them.

Yearly
Naturalization Ceremony for new U.S. citizens, presided over by a federal judge at the LBJ Auditorium

© The University of Texas at Austin 2020